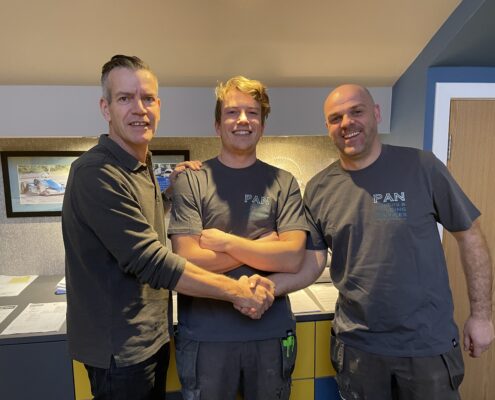 It is with immense pleasure and pride that Peter Newton is soon to hand over the reigns of Pan Joiners & Building Services and leave Pan Joiners in the capable hands of Dougie and Lewis.

Established in 1992 and growing from an office under the stairs and a shed at the bottom of the garden, PAN has grown to be a well respected and successful joinery and building contractor serving the local area for thirty years, occupying an extremely prominent position in the heart of Old Mill Park, Kirkintilloch.

Peter was diagnosed with cancer in March 2021 and although he now has a totally clean bill of health after a successful treatment programme, that old cliché has made him decide that 2022 should hold different challenges and more opportunities for ‘down-time’.

The future of the business was never in question. Douglas Rae has been a key member of the team for 27 years and Company Foreman for the last 12 of those years. Peter’s son, Lewis, has been lending a hand since his school days and more recently completed a mature apprenticeship in Joinery & Carpentry. After studying Architecture at the Mack for two years and then gaining a degree in Environmental Science at Stirling University, Lewis decided his true passion and vocation was in joinery and construction.

Together, Dougie and Lewis will take Pan Joiners Limited to the next stage, focussing on that type of work that the Company foundations have been built on – Client focussed, high quality construction projects primarily in the domestic market. Peter wishes the new Directors the absolute best for the future but he won’t disappear entirely. In fact, he intends to be around for the newbies just as long as they want him – pricing their work, physically helping on site, tidying up even. But not brewing up!

Also, January next year sees the launch of Pan Projects, Peter’s one-man-band business which shall primarily be concentrating on organising and project managing domestic building projects and he shall also be undertaking small commissions for which he shall adopt a very hands-on approach, sub-contracting to the usual base of trusted trades people as and when required. To get in touch with Peter directly please email peter@panprojects.co.uk 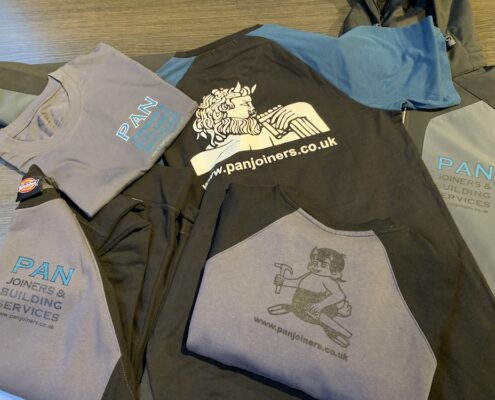 In conjunction with revamping our website to better show-off what PAN is all about, we combine this with the introduction of our new work clothing. With a team of 11 guys and 7 vans on the road, we feel it is important to promote the business in a smart and presentable way. With clean and clearly liveried vehicles on the road and smart distinguishable clothing, we hope this reinforces our intention to provide the sort of quality service that is expected.
Thanks to Iain at www.sole-media.co.uk for all his hard work in developing the website and to Cameron at Bath Street Press https://www.facebook.com/bathstreetpress/ for doing a fantastic job of printing the clothing.
Nice to see the nearly 30 year old ‘Goat’ making a reappearance on the back of the sweatshirts! Thanks to Nikki for that one 😊
Scroll to top